One of the “meh” things about having a cat is the litter box. Cleaning it is one thing, but where to put it is another. Some friends of mine keep their cat’s litter box in the bathroom, in the basement with a cat door, or in the room by the backdoor. I keep it in the bathroom in the bathtub and move it out into the hallway every morning when I get ready. It is something I’ve always done, plus it reminds me to clean the box. Wherever you may keep the litter box, it seems two things are important with placement:

There are some pretty cleverly-designed litter boxes for us cat owners if we don’t like the boring old plastic box or need something a little more fancy for those of us who keep the litter box in a room where it can be seen, including some that take almost all the work out of cat box duty.

Here are 11 litter boxes that are high-tech, well-designed, and some of which are – yes – actually pretty. 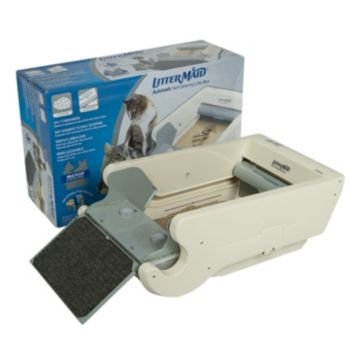 We probably all remember the first time we saw a commercial for the Littermaid Self-Cleaning Litter Box – it seemed like a dream come true, right? Now there are a few other self-cleaning litter box brands on the market, but Littermaid remains one of the most familiar. The mechanized litter box senses when your cat has left the box after doing its business and then rakes through the litter to collect the waste, which it deposits in a container at one end of the box. When the container is full, you replace it with a new one. This “Mega” box is even designed for multi-cat households. 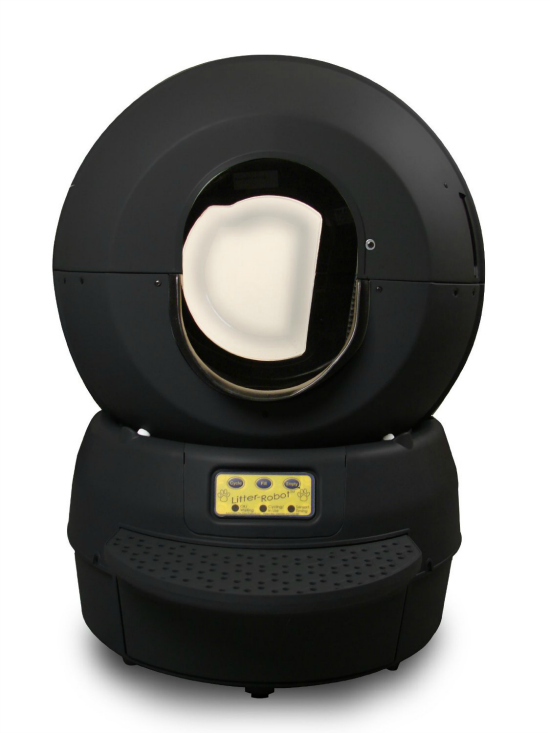 Another newer option in the self-cleaning litter box category is the Litter Robot Bubble Unit. It comes in a couple colors, but the black version reminds us a bit of the “Death Star” from Star Wars, which we think is kind of funny. At any rate, no matter what color you choose, the Litter Robot works the same way – it senses when your cat has left the litter box, and then the top part (the “bubble”) begins to turn slowly, depositing the collected waste into the bottom part of the unit through a door that opens as the unit is turning. This quick removal of waste plus the Little Robot’s carbon filter help keep litter box odors at bay. 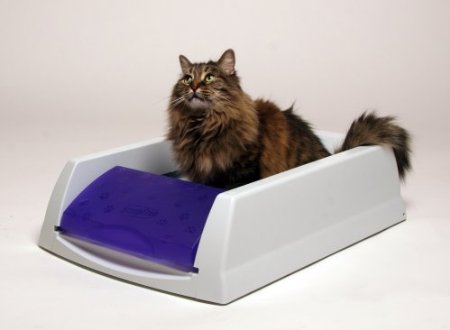 For a mechanized self-cleaning litter box that won’t break the bank, you might consider the Scoop Free model. Designed by cat lovers at MIT, the Scoop Free litter box works essentially like other similar models in that it senses when the cat leaves the box and then automatically rakes through to collect the waste several minutes later. One major difference with the Scoop Free litter box is the tray is disposable, so rather than refilling an existing tray over and over you simply remove the old one and replace it with a fresh one (the manufacturers say you can do this once a month or so, depending on how many cats you have). They also recommend using special blue crystals for litter to help eliminate odors. 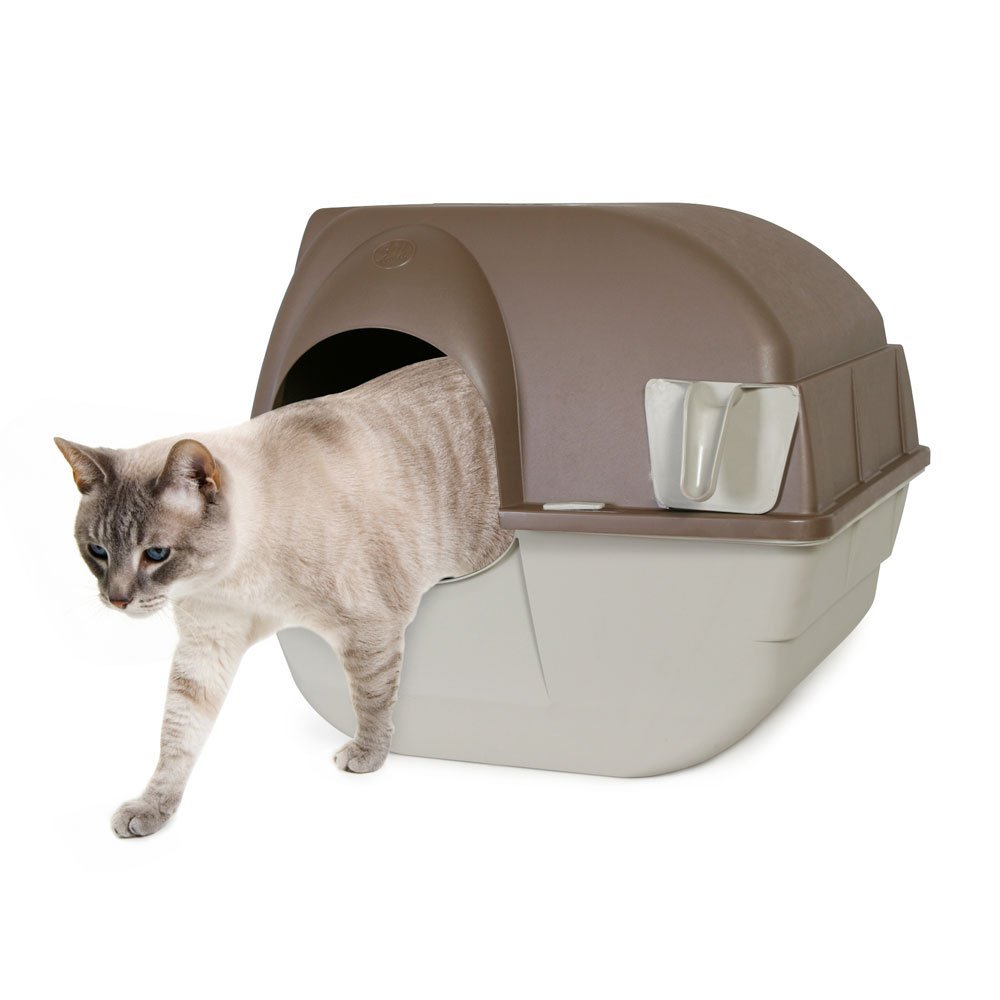 The Omega Paw Self-Cleaning Litter Box cleans in just seconds without scooping – but this time you’re doing the rolling, rather than the litter box being mechanical in any way. Inside the litter box a grating separates the tray where the cat goes from the area where waste collects when you tilt the box. It’s not mechanized, so it’s a less expensive option, but it also doesn’t remove waste soon after your cat uses the litter box – so it may not help with odor issues any more than a normal box. 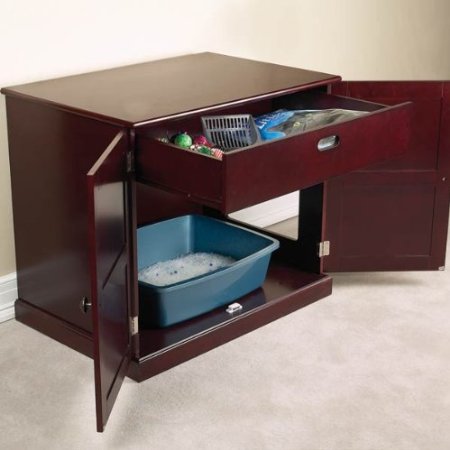 If you’re looking for a way to camouflage a normal cat litter box so it just blends in with its surroundings, then hiding it in a piece of furniture is a good option. This Pet Studio Litter Box Cabinet conceals a regular litter box tray behind closed doors, with a side opening where kitty can go in and out. There’s also a drawer where you can store your cat’s litter box items or other pet-related things. 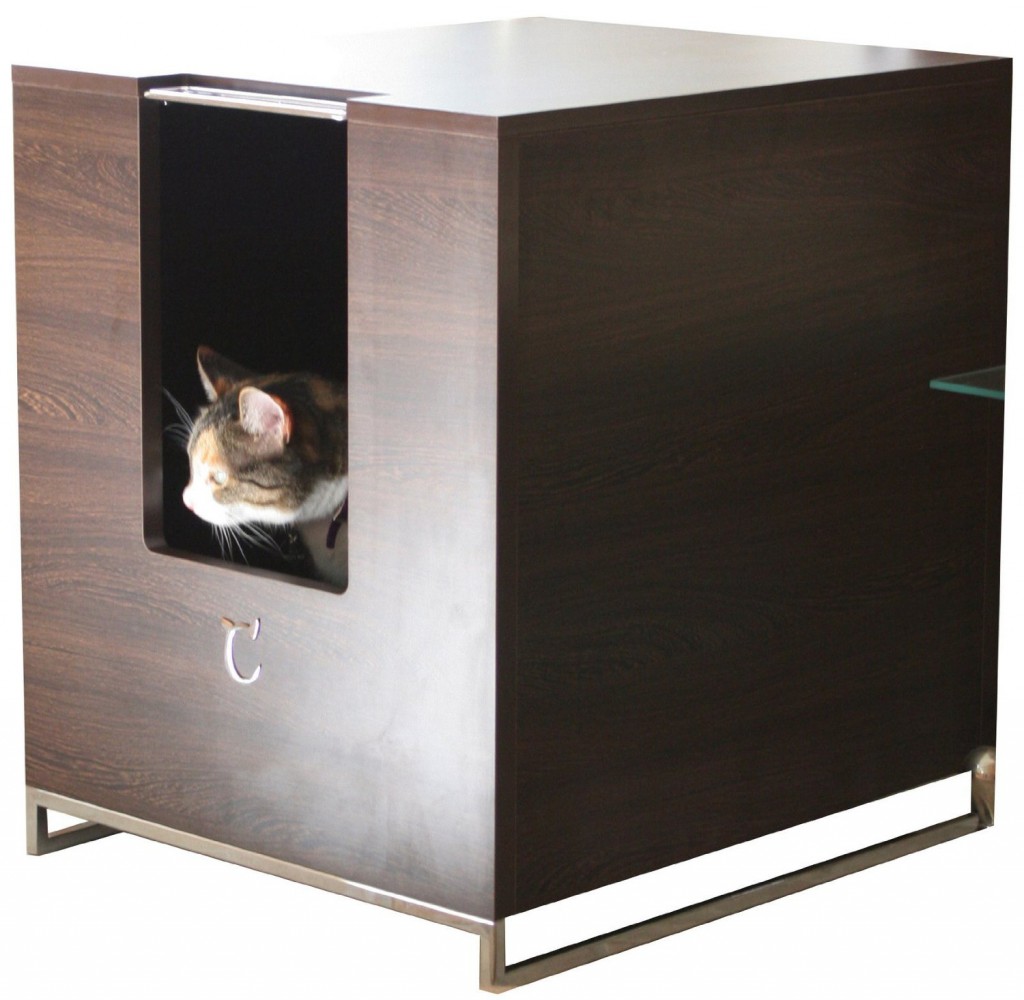 Is your home decor and fashion sense a little more on the modern side? Then this Modern Cat Designs litter box cabinet might catch your eye. You’ll need to get a litter tray for the bottom – this is only the decorative container to hide it – but as long as you can’t see the utilitarian plastic tray inside that’s the main thing. 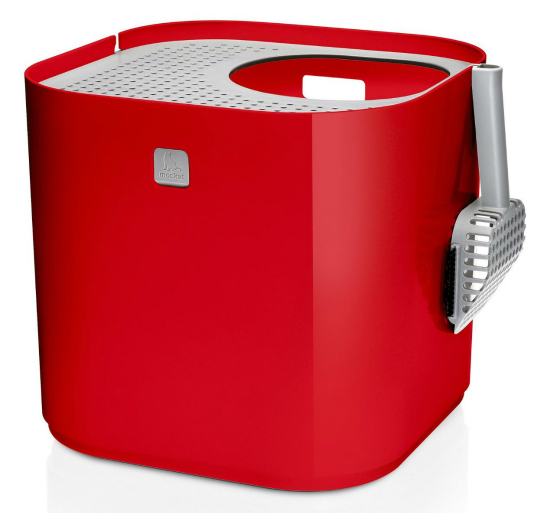 Another option for the forward-design-conscious is this Modkat Litter Box. It’s got a sleek modern design, comes in several colors, and is a top-entry style litter box (which can help reduce litter tracking when the cat exits the box). 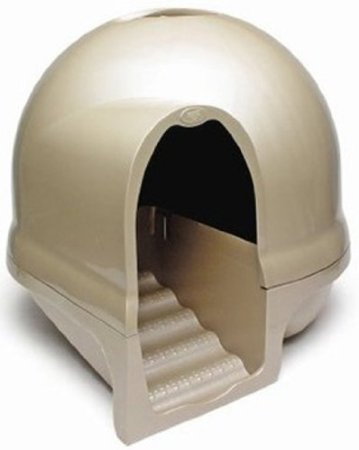 Give your cat’s litter box a more stately appearance with a grand entry staircase like the one on the Petmate Booda Dome. The stairs act as a litter catcher as your cat is leaving the box, and they also hide the unsightly litter tray, which you can’t easily see from the outside of the box. The entire domed lid removes for easy access to the tray when you need to clean the box. 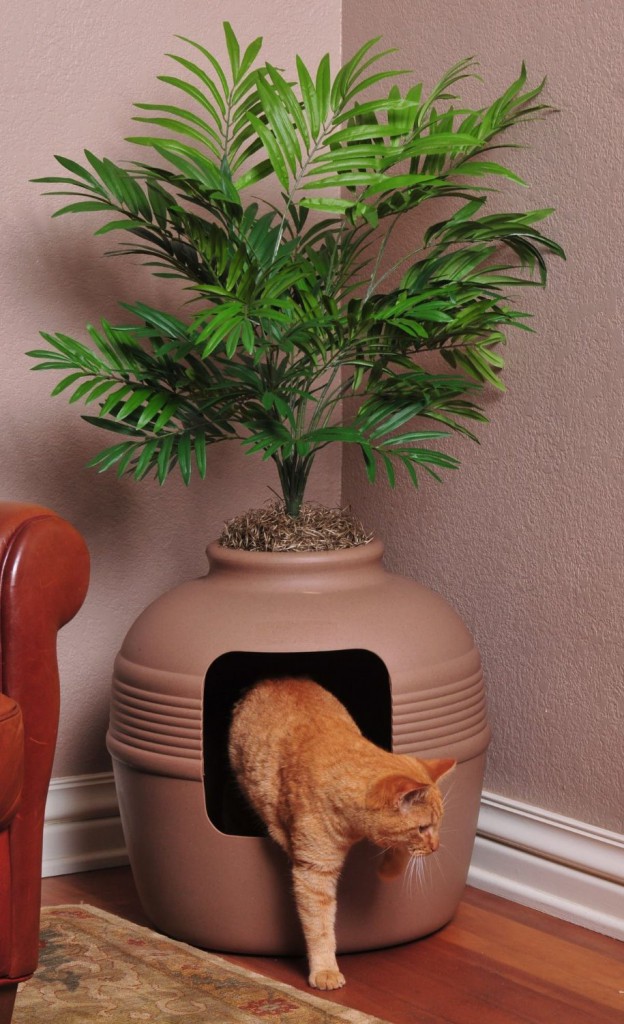 Hiding a litter box in plain sight couldn’t be easier with the Good Pet Stuff Hidden Litter Box. The litter tray sits in the bottom of an oversized faux clay plant pot, with a fake plant coming out of the opening at the top. If you put the pot in a corner, with the cat’s opening pointed toward the wall, no one would immediately suspect that it’s really a litter box. Your friends may wonder why your cat is walking out of the plant’s pot, though. 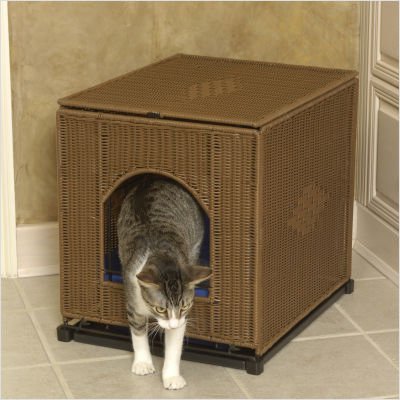 If all you need is a simple cover for an ordinary cat’s litter box tray, then consider this Wicker Cat Litter Pan Cover. The front “wall” is on a hinge to make it easy to clean as well as to get the litter tray in and out. The “wicker” is actually made of resin, so it won’t absorb moisture or odors. 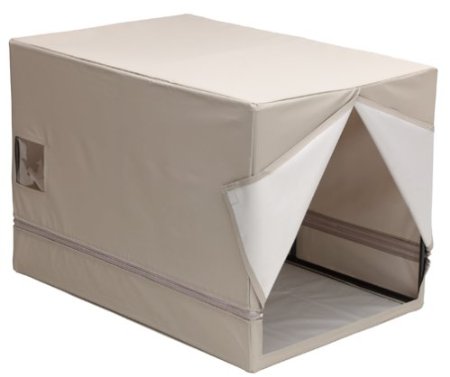 For those of us whose litter boxes don’t need to look like furniture, but we’d still rather not see what’s going on in there, this simple LitterMaid Cat Privacy Tent does the trick. It’s actually designed to fit over the self-cleaning LitterMaid boxes (see above), but works over any litter box that doesn’t already have a cover or lid. The tent is made of waterproof vinyl and can be wiped out with a damp cloth or washed in warm, soapy water.