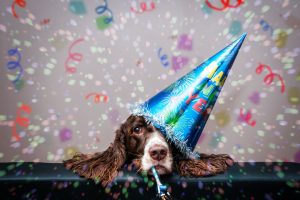 Hey, I’m just a dog so I don’t really need to make a New Year’s resolution. I mean, what is there to improve? Dogs are by their very nature good-hearted and dedicated to their masters, wanting only to be happy and give happiness in return. It’s our two-legged companions that seem to be the troubled ones. They constantly feel the need to “better” themselves and, by trying, only make things worse because they can never live up to their resolutions. This leads to a downward spiral that, IMHO, ends up defining who they are as a species. So, as a dog, let me just say from the get-go, “Homey don’t play that game.”

But then I got to thinking. Maybe there’s something I can do as a dog to help my owner live up to his New Year’s resolutions. Small gestures done in the background, quietly and unnoticed, that will help him get out of the rut he constantly finds himself in. And rut is a kind word. It’s really a humongous, deep hole. You know, the kind that dogs are always getting in trouble for digging. The difference is that we’re digging holes in some remote part of the yard that no one ever notices. Humans are digging them in the very fiber or their tortured souls. Yikes.

Anyway, as of late, I’ve noticed my owner has hit the bottom of the barrel. The other day I saw him in the bathroom blow-drying a cigarette butt he rescued from a puddle while he was walking me. I know he wants to quit smoking and is going to make it one of his New Year’s resolutions. To prepare himself, he’s already sworn off buying new packs of cigarettes which led to the tragic scene I witnessed.

So I’ve decided to make a resolution to help him by dropping a pack of nicotine gum into his stocking. I know a Yorkie at the local Rite Aid who can get me a good deal. Now, that’s what I call a Secret Santa.

But I’m not stopping there. I’m going to make another resolution: I’m going to bury all his Leonard Cohen albums. Yes, you heard me. Hey, I know it’s risky thing to do but I’m convinced that it’s a huge part of his problem. I won’t go into details here as to why—let’s just say it’s just a matter of canine good taste—but I’m going to do it. Because that’s what best friends—also known as dogs—do. And, on top of that, I’m going to bury them not in my own hole, but in one that Leonard Cohen has already dug. What does that even mean?? you might ask. I don’t know exactly but at this point I’m just following my instincts.  They’re all I’ve got.

And so I summon all my canine friends to do the same. To make New Years’ resolutions that will help their owners in ways that aren’t necessarily apparent—especially to them. Hide their cellphones under a pile of unpaid bills, for example. Or yank the plug from the computer.  Or urinate on his latest issue of Cigar Aficionado. Or sulk until he takes you for extremely long walks in the woods. The possibilities are endless. Trust me. It will make a profound difference in your owners’ lives. And yours.

By attending to your humans, they will better attend to you. It’s a fundamental law of the universe. Try it and you’ll see.  The world could use a few New Year miracles. And isn’t that what the holidays are all about?

This is one of a continuing series of Petswelcome articles by dogs giving their unique insights and opinions.