Cats are good at letting us know what they like and don’t like. Some cats hate being placed into pet carriers and will fight their way out as best they can. I had a cat that pushed against the metal door till his nose and feet were rubbed raw. I’ve also had a cat that broke a soft carrier and then sat next it with a look of pride as if he had defeated the horrible carrier. Every cat I’ve known doesn’t mind water that much unless they’ve had to had a bath. Some cats have sat there and whined and others have re-enacted a scene from a horror movie.

No one really knows but it’s assumed to have something to do with their lineage. Cats have roots in Africa, and the dry regions did not have a lot of water. It might be that cats never really adapted or inherited behaviors to tolerate water or like it the way some dogs seem to like it. Cats can swim though, in fact, the Turkish Van seems to be the one breed that doesn’t mind water at all. They have been known to swim out to greet fishing boats coming to shore in Turkey. But not many cats will step into a puddle or willingly go swimming. 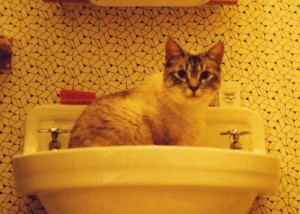 Cats don’t need to be bathed regularly because they groom themselves. They do need to be brushed and some long hair breeds may need to have their fur trimmed. If a cat can’t groom themselves properly due to an illness or other reason, a little help is necessary and a trip to the vet to see what might be going on. If there’s no medical condition found, your cat might just be aging or a little chubby and can’t reach all the places she used to. In this case, a bath might be needed now and then.

If you do bathe your cat, make the bath quick, don’t make a lot of noise, and reward her after it’s done. You can slowly acclimate your cat to the tub by placing treats in there for her, a few toys, and getting her used to the space. Then try filling it with about an inch of water and see how she feels about walking around in it. She may jump out. She may step and shake her paws with disgust.

Once your cat seems to be ok hanging out in the tub, doesn’t mind getting her toes wet, it might be time for the bath. Cats like to sink their claws into something and it’d be better if it was a towel on the bottom of the tub than your shoulders, the shower curtain, or your head. Be quick, use a cup to rinse the shampoo off instead of the spray attachment if she’s very upset, and speak softly as you wet her down, shampoo her, and rinse. When the bath is done, towel dry your cat and brush her. She will be unhappy and upset so make sure she’s rewarded with gentle petting, soothing tones of voice, and a few treats.