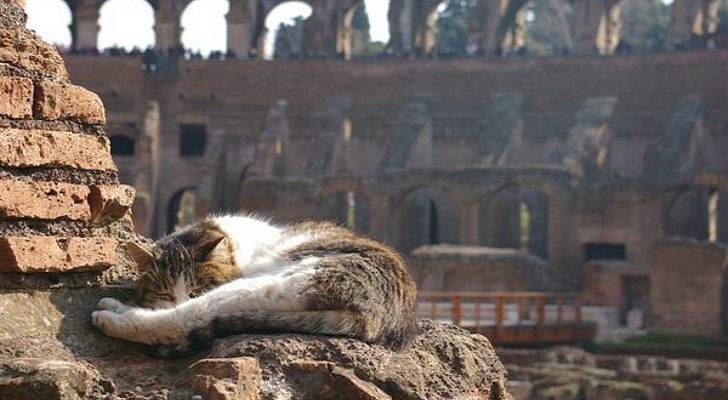 My aunt told me when she traveled around Italy years ago she had seen cats in Rome, at the ruins, sitting around. She said it was surreal. She turned and saw one cat, then slowly as dusk set in more and more cats appeared among the ruins not too far from where it is believed Julius Ceasar was killed. She also told me people came and left small cans of cat food for the felines. It was like offering gifts to them. They had claimed the ruins as their home.

This was over 30 years ago. In the last 20 years, the ruins have become a sanctuary for cats and has helped to control the feral and homeless cat population. In the last six months it seems the sanctuary has been under pressure to close its doors or make a huge overhaul of the 1000 sq feet it occupies in one of the lower levels of the ruins.

Authorities are questioning how hygienic it is to have the cats living among the ruins and there is a lot of heated debate. Tourist books, websites, and calendars all talk about visiting the ruins and seeing the cats that live there. I have a feeling the cats would live there even if there wasn’t a sanctuary. According to the LA Times some authorities believe that the sanctuary is essentially squatting on historic land.

The two co-founders find the eviction notice ridiculous and have support in the mayor, many twitter followers, and locals. Gianni Alemanno, the mayor of Rome, tweeted, “I’m on the cats’ side,” then followed it with “So is my own cat, Certosino.”

It’s been known that cats are a part of the heritage of Rome. There are records of cats roaming the city, being an integral part of the culture, and living in the ruins at Largo di Torre Argentina for at least 80 years. Italy has a no-kill policy which means the cats aren’t put down in shelters but on the flip side, the cats must all survive on the streets and many can become ill, hungry, and need medical attention. Having a sanctuary where cats are neutered and spayed, fed, and adopted out, is needed. The sanctuary has helped cut down on the number of cats in the city by spaying and neutering about 2700 cats in the 19 years of its existence, which is quite impressive since the sanctuary relies on private donations only. Apparently, at one point before the sanctuary started, there could be seen dead cats in the streets and with that came the smell of a deceased animal too.

Officials do recognize the contribution, however, they do not seem to want the sanctuary stationed where it is anymore. The reasons that could be inferred is that it is historical place and fears of the ruins being ruined by infrastructure changes. The reality is that there is no real concern about that, the city doesn’t want to connect the sanctuary to the sewage system. Whatever changes or cost that would incur suddenly put the sanctuary on the radar of the city.

It’s unclear what agreement, if any, has been in effect until now and it’s also unclear what alternatives are available to the sanctuary. At the moment, the founders of the sanctuary do not want to move and are fighting as best they can.

For more about the fate of the sanctuary at Largo di Torre Argentina, read the article at the LA Times and on NPR.

Have you visited the ruins and seen the cats? What’s your opinion?