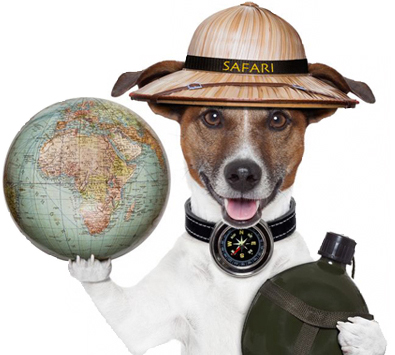 “Nobody knows you’re a dog on the internet,” is the caption of a famous New Yorker cartoon that shows one dog sitting at a computer explaining to another dog the advantages of cyberspace. I’ve always loved that cartoon and thought that, in a weird way, it captured what I do for a living. Not that I’m a dog, but I do spend a huge amount of time on computers advocating for dogs.  And I do it in my pajamas. (Nobody knows you’re in your pajamas on the internet, either….). And when you think about it, that’s a pretty strange and, to my mind, wonderful job description.

It’s not like I answered a help wanted ad that said: “Wanted: Dog lover who loves to help dogs while in pajamas and who also loves making money doing it.” I would have answered such an ad, but I never came across one. As with all great jobs, I just kind of fell into it. There was no burning desire or master plan to make Petswelcome my life’s work. As a kid, I didn’t have any aspirations to run a pet site. If I did, it would have been very prescient of me because the internet didn’t exist yet.

Looking back, the only two relevant traits I had for this job was an encompassing love of dogs and difficulty getting out of bed every morning. It seems my fate was sealed from a very early age. Not that I’m a megalomaniac or anything, but I honestly believe that my mother secretly invented the internet just so that there would be a job for me, one that demanded few talents and zero ambition.

Truth be told, though, I feel guilty about having such plum employment. I mean, the commute down the stairs from my bedroom is taxing but when I look out my window, which I rarely do, I think I see people driving in cars and getting on trains. What’s that about? Also, I’ve noticed that it gets cold outside at certain times of the year and yet they still persist in their headlong rush to wherever. One day I’m going to head down to the train station and try to talk sense to them but, as I say, it’s cold outside so that will have to wait.

I did, however, find someone who seems to have a better job than me. I came across an article this past week in the Washington Post called, Travel the World by Taking Care of Pets, by Andrea Sachs. I highly recommend it. It’s about being able to travel to great places around the globe by pet sitting. You get paid for hanging out with great animals and you get to stay at the owners’ houses so your travel expenses are greatly reduced. And, if you’re a travel writer, you can write about it and, I assume, get paid for that, too. Pretty awesome! I wonder what her mother invented to get her that job?

But enough about me. Petswelcome has signed up some great new pet friendly hotels, inns and B&Bs in the past few weeks. Check them out and, by next week, I should be out of bed and reporting on some new pet-friendly trends for 2019.