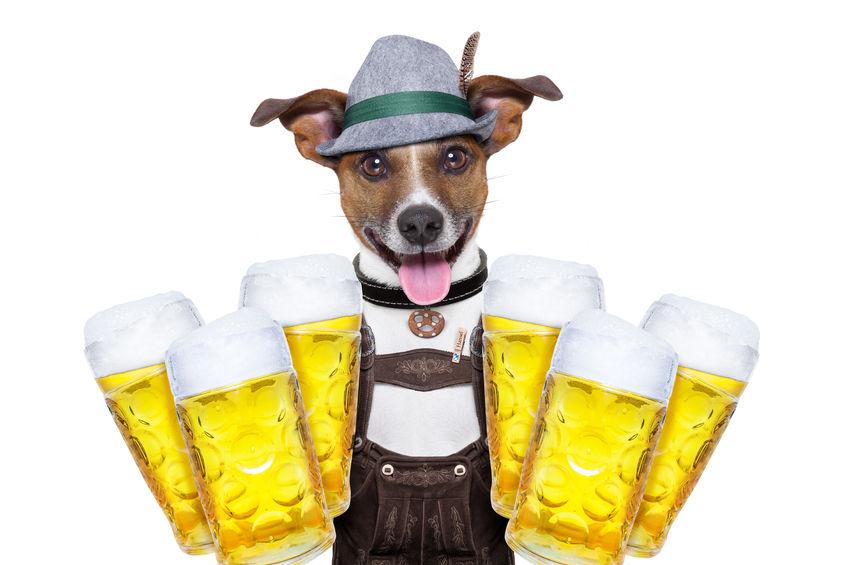 At Petswelcome we obviously focus on finding pet friendly hotels whenever we travel. But once we arrive, we like to head out to do some exploring with our pets in tow to see what’s going on in our new destination. One of our first priorities is to scope out places where we can eat, such as pet friendly cafes, food trucks and other outdoor venues that allow pets. Recently, we’ve been checking out another awesome option that was previously below our radar: pet friendly beer gardens.

Beer gardens are open-air outdoor areas, often shaded, and set up with tables and/or benches where food and drinks are served and socializing is encouraged. This community-like feeling is one of the nicest aspects of beer gardens, as it promotes mingling with other guests much more than traditional cafes, or restaurants that may have a few outside tables. Bring a dog along to pet friendly beer gardens  and you’ll find that the interaction will be compounded and suddenly you’ll have found a bunch of great people to talk to, share stories with and maybe also get some insider tips on other places to visit at your current destination.

The concept of the modern open-air beer garden, or Biergarten, originally began in Germany, specifically Bavaria. Brewers realized that beer ferments better in cool temperatures and so dug cellars and planted gardens and shallow-rooted trees like chestnuts above the cellars to help keep them cool and promote the fermentation process. This combination of beer and gardens in close proximity naturally led to the beer being consumed in and around the gardens and, Voila!, the notion of a modern beer garden was born. And now, with the current national craze for local beers brewed on site—with many bars offering 20+ taps of craft beers—beer gardens have become even more popular, being the perfect venue for brewers of all stripes to show off their diverse quaffs in a unique, fun and extremely social environment. In addition, not only are the beers offerings more varied, but today you can also find much more variety in the food selections. While many beer gardens do offer traditional German fare such as Bavarian pretzels, brats and other wursts, many are moving to more diverse menus and serving up sliders, pizzas, nachos, vegetarian dishes and more.

Here are some great pet friendly beer gardens around the country:

Now that we’ve said many beer gardens are moving beyond German fare, the Dog Haus Biergarten embraces it. Their is tagline is “The Absolute Wurst.”  They offer many types of sausage and dogs, but with modern twists, including the Thai Fighter (Thai Currywurst, wild arugula, pickled jalapenos, and spicy basil aoli) as well as The Fonz (spicy Italian pastrami in a cheddar cheese sauce). Other meals include Haus Chicken (Bad Mutha Clucka), Corn Dog Sliders and the Free Bird (turkey dog, avocado, tomato, smoked bacon and miso ranch dressing). Yum! And, of course, they have ten craft beers on tap. Dog Haus is now a franchise with more than 30 locations, so look for openings in other cities you visit.

Alexrad Beer Garden has an expansive patio where you can sit with your best buddy and enjoy one of their 31 beers on tap, including (as of this writing) Art Car IPA, Hop Stoopid, Fancy Lawnmower, Juicy Goodness, Firemans #4 Blonde Ale, Abide Stout-Russian Imperial, Pussy Wagon IPA and Nobility Stout – American Imperial/Double. And while they don’t serve food, you can order from Luigi’s Pizzeria right next door and enjoy it in Alexrad’s beautiful garden, which is planted with different native, regional, and heirloom plants. They also host guest food trucks, film screenings, live music and festivals. Relaxing and subtlety upscale, Alexrad’s is not your father’s beer garden.

Sit in this pet friendly beer garden and enjoy a delicious meal, which could include their Carnitas Rice Bowl, Chicken Chipotle Sandwich, or Pedro’s Favorite Tri Tip Salad (with tri tip, lettuce, carrots, tomato, jalapeno, pineapple, olives, corn, onions, and cilantro-garlic sauce). Like Alexrad’s they also invite guest food trucks to broaden the menu.  And, of course, they serve California craft ales on eight rotating taps. To keep it traditional, you can drink your beer from their 1-liter German-style steins or try a flight of different tastings. They also offer hard ciders, mead, and house-made sangrias in addition to other more standard wine selections. And we love that they’re big on giving back to the community by supporting local businesses and animal causes, including the ARF Animal Rescue Foundation and Canine Companions for Independence. Now that’s our kind of beer garden! 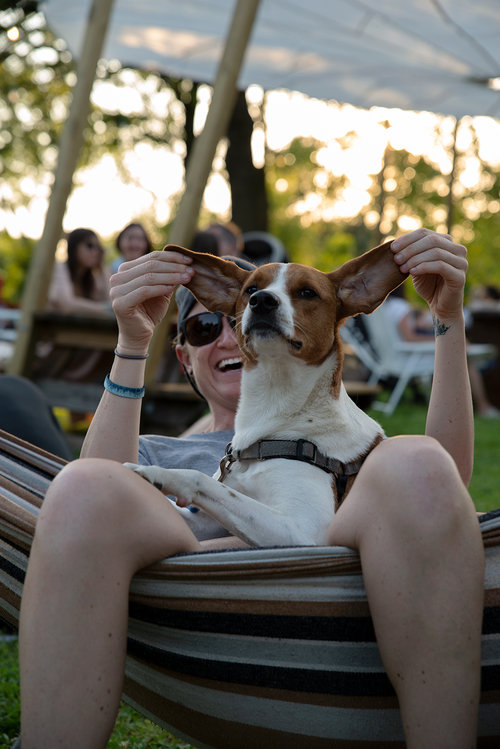 Biercamp calls themselves a “Meat Shop & Microbrewery,” producing all their own artisan meats and small batch beers; it’s also a pet friendly beer garden. It’s the perfect destination, then, for man and beast alike. Biercamp only works with farms which treats animals humanely, using no antibiotics, hormones or artificial ingredients. Their beers are all brewed in-house and can be had by the pint or half pint at their outdoor beer garden. Current beer offerings include Vienna IPA, Saison, Double IPA and Belgian Brown. Food offerings include house-made sausages and jerky of all types, burgers, ribs, steaks and banana pudding. They were named one of the top 25 food destinations in America by Sports Illustrated.

Their motto is: Beer Makes it Better. And if you add dogs to that mix, Better becomes Great. And since it’s a pet friendly beer garden—with good food and live music—we’re just going to embrace this compliment fest and say that the Austin Beer Garden and Brewing Company is Friggin’ Awesome! With six mainstay beers (Hell Yes, Industry, Day Trip, Superliner, Big Mama Red and Rocket 100) as well as four other “sometimes” beers, you’ll be sure to find something you like. We especially appreciate when they’re serving up APA!APA #11 Idaho 7, a single hopped American Pale, not only because it’s delicious but also because it’s brewed to benefit Austin Pets Alive Long Stay Dogs. This series of beer has so far raised over $45,000 for the cause. To that we say, Cheers!

According to VBGB, they are a “contemporary take on beer gardens from around the world.” With a dog-friendly patio (Charlotte’s largest and tented from fall to spring), 30 craft beers on tap, and a Frost Rail (5 inches of ice going down the 72’ bar), we have to agree. Most entrees are under $10 and are a mix of German fare, traditional bar food, and healthy alternatives.

A pet friendly beer garden along the Christina Riverwalk in Wilmington, it boasts a 30,000 square foot patio with plenty of room for backyard games such as bocce, badminton and a full sized whiffle-ball field (we like that). It offers a mix of snacks (waffle fries, baby back ribs), salads (Cobb and Caprese), sandwiches (Vietnamese sausage and cheddarwurst), as well as great desserts. And, with 10 draft beers, 21 canned beers as well as draft wine and canned cocktails, you certainly should be able to slake your thirst.

Finally, Philadelphia Parks and Recreation, in partnership with Fairmount Park Conservancy and FCM Hospitality offers perhaps the most novel take on pet friendly beer gardens with the Parks on Tap program, which brings traveling beer gardens to different parks throughout the summer. They provide great food, beer on tap, wine and snacks as well as comfortable chairs and hammocks (we like hammocks!) so that you can enjoy your favorite beverage in a beautiful surrounding.  They even have a program called Barks on Tap where beer gardens are set up at various dog parks around the city on Thursday afternoons in July and August.

To our way of thinking, there is no better way to spend a summer afternoon than sitting in a beautiful shaded garden or patio with friends (both human and canine), sipping on our favorite beverages (whatever they may be) and watching the world slip leisurely by. We highly suggest you and your dog(s) do the same.