Petswelcome.com / Articles / My Dog vs Alexa: An Intelligence Test 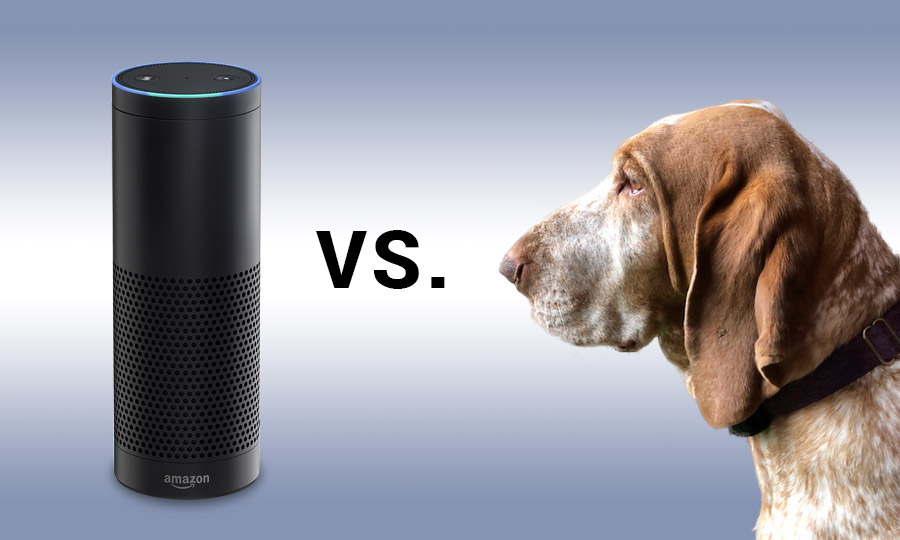 To the casual observer, it would appear that Alexa (Amazon’s “Smart” Speaker) has a huge intelligence advantage over dogs. Especially if you define smart as providing a meaningful response to a specific command. However, my research reveals that canines are actually smarter than Alexa. This is true even when I pit her against my dog Hobbes who has a well-deserved reputation of not working with “a full box of biscuits.”

For example, when I say to Alexa, “Come!” she doesn’t come. I wish I could claim that Hobbes comes, but he doesn’t either. The evidence, however, suggests that they both don’t come for different reasons. Alexa has no legs. Hobbes, on the other hand, doesn’t come because, in general, he doesn’t give a rat’s ass about anything I tell him to do. Ever.

Taking the test one step further, though, and Hobbes’s intellectual cunning becomes obvious. It turns out that if I start opening a bag of Pup-Peroni (or any kind of treat) and then yell Come! Hobbes dashes over to me in a nanosecond. More intriguing, I don’t even have to yell a command. He shows up anyway. Faster than you can say “E=MC2”. Sadly, this was not the case with Alexa. She just laid there like lox.

OK. Maybe that wasn’t a fair test. As I said, Alexa has no legs.  So, for my next challenge, I picked a test in which locomotion wasn’t required and one in which Alexa should easily prevail.  First, I said to Hobbes, I’d like to hear the song Nuclear by Ryan Adams. As I expected, he just looked at me blankly, tilted his head in the way dogs do and ran off and fetched a favorite watch of mine that he had evidently buried in the backyard.  However, when I asked Alexa, she responded, “Nuclear isn’t included in Prime but is available with Amazon Music Unlimited. Would you like to learn more?” Hmmm.  Sounds like a bit of a con job. Smart? Maybe. But I preferred getting my old watch back.

And that, to me, is the essence of why dogs are smarter than “smart” technology. Hobbes was more interested in trying to please me than Alexa was. And, in doing so, he is looking out for his own welfare and continued survival as a species which, by any measure, is smart. (Also, I think he actually likes me which shows extremely good taste, too…Hear that Alexa?) Alexa, on the other hand, didn’t really care if I was happy. She sounded like a cable rep, more interested in selling me an upgrade under the guise of “customer service” than offering real satisfaction. I’m not sure that bodes well for her long-term survival.

Sure, there is a wow factor in hearing her, upon request, recite the numerical value of pi. But, finally, it doesn’t amount to a hill of beans if she doesn’t have the sense to come in out of the rain. I tested that, too. Last I checked she was still in the middle of the street in a puddle. Wait, now she’s on the side of the road. Progress? No. It turns out she was hit by a bus. Artificial intelligence indeed.

Next round: Hobbes goes toe to toe (or whatever) with a Magic 8 Ball.