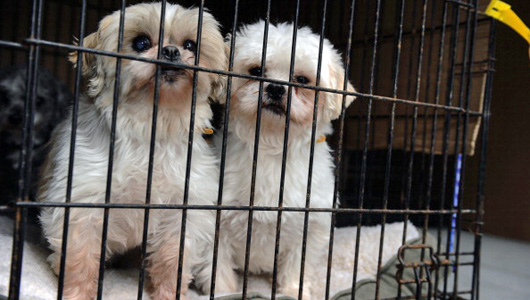 On September 10, 2013, the United States Department of Agriculture (USDA) passed a new rule that includes those who sell animals online under the regulatory umbrella of the Animal Welfare Act. This is a huge victory for those who fight to expose and stop puppy mills and puppy farms from selling, breeding, and treating animals like goods.

This means that USDA inspectors will now begin looking at businesses or breeders who sell online or advertise their puppies for sale online via internet sites (their own or 3rd party sites like Craigslist). The Animal Welfare Act was signed in law in 1966 and since that time has had several amendments added as the sales and care of animals have changed with the passing decades. This newest addition of adding online/internet breeders is a huge victory.

The latest changes mean that anyone who breeds more than four females and sells puppies online, by mail, or any form of communication that is not face to face will be held to the same oversight as wholesale breeders. Until now, online breeders have been able to operate under the radar and not bother having licenses, inspections, or even location known. Now, buyers and USDA inspectors will be able to view and meet the pets before buying them.

The rules are targeted to dog breeders but could affect those who breed other animals too such as cat and rabbit breeders. It also protects the buyer to ensure they are purchasing a healthy, well-cared for pet and see the facilities and personality of the parents. According to the article in the Huffington Post, it’s estimated that up to 4,640 dog breeders could be affected as well as 325 cat breeders and up to 75 rabbit breeders.

There are mixed reactions to the new rule. Some contest it might be too broad, hobby breeders are expressing fear that they will be negatively affected, and terminology is being questioned. The other side is counting this as a huge victory towards fighting puppy mills, stating that hobby breeders won’t be affected and those who need to buy a license will be able to do so.

What are your thoughts? Let us know!