I have to admit, as much as I love animals, when I heard that companies are now offering pet insurance, my first response was “You’ve got to be kidding me!” This was basically the same response I had when I learned there were pet psychiatrist and pet psychics…. But then I thought about it.

A few years ago I had a beloved cat named Winston. Winston had been with me for 5 years. He had moved with me from one state to another and then back again. He had also  sat on my lap, purring and butting his head against me, when I had a major health scare.

Then one day he was on my lap and I noticed he was getting a little thin. I started watching his food and realized he wasn’t eating  much, so I took him into the vet. 6 days later I came home with my cat. It turns out he had kidney failure but, much to the surprise of myself and my vet, had responded to treatment and was able to come home with me. By some miracle, he had recovered. 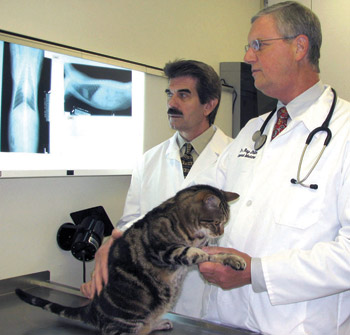 The invoice from my vet for saving Winstons life was close to a thousand dollars. I pondered this. On the one hand, it had cost an arm and a leg, and after all, he was just a cat. But on the other hand, he was like family to me, and because of this enormous bill I was able to have three more years with him.

I’m guessing a lot of pet owners have experienced this dilemna because now more and more pet insurance is offered for just that reason. Insurance, which covers routine visits as well as major catastrophes, costs approximately $25-$30 per month. If I had had pet insurance when I took Winston in, his six overnight stays, as well as treatment and anesthesia, would have cost’ me approximately $50.

The thing is, when the vet asked me if I wanted to put Winston to sleep or try to save him, he warned me that it could get expensive. For me though it was a no-brainer. My heart always wins…. but if I had to do it over again, I would have gotten insurance.

If you’d like to know more, read our guide to pet health insurance including plans and companies that offer insurance.