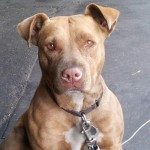 Pawtucket, Rhode Island wants to retain their breed ban even though a judge found that the law is void under the state laws regarding domestic pets. However, a bill known as, H 5800, would amend the state’s animal control law that prohibits breed discriminatory laws. The Amendment would allow for a ban to stand that […]

Recently, Assemblywoman Grace Spencer proposed a new law that would require residents of New Jersey to keep dogs restrained while riding in cars either using a car seat, harness, or carrier. This is cut down on the chance of an accident due to being distracted by your pet. While some dogs ride in cars quietly […]