Petswelcome.com / Articles / The Best Foods to Feed Your Rabbit

Pet rabbits are relatively easy to feed, but owners should definitely take a few precautions to know how to feed their rabbit healthily. Owners should make sure to keep their rabbit’s diet relatively consistent, and do not jump to tons of new foods instantly. Whether you are traveling or being stationed with your rabbit, the feeding rules remain the same.

Most importantly, pet rabbits should have a steady supply of grass hay. The best kinds are Meadow Hay, Oat Hay, Timothy Hay and Rye Hay. Timothy Hay is very easy to obtain in the US. Certain types of hays have too much energy for domestic rabbits, such as alfalfa hay and clover hay. It is not a good idea to feed these to your rabbit because they will not be able to burn off all of the energy and will gain weight instead. Hay is also the best food for rabbits because they enjoy chewing it, and it keeps their teeth healthy.

The second most important thing to feed your rabbit is green foods. Bunnies that are younger than six months do not have the most developed digestive systems, so you should not feed them such foods. You should also not try to experiment with a bunch of new foods when it becomes of age, in case the rabbit’s digestive system reacts poorly to certain things. Examples of these greens include: basil, dandelions, brussel sprouts, watercress, beans and carrot tops. 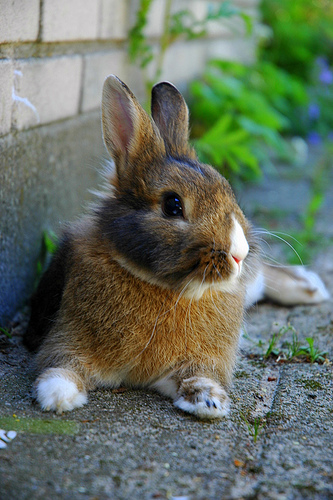 You can feed your rabbit treats occasionally, but avoid doing this on a regular basis. Most treat food for rabbit consists of fresh fruits. While rabbits love the taste of fruit, it does tend to make them fat. Some fresh options include pineapple, peaches, strawberries, cranberries, and kiwis. Pre-packaged rabbit treats are generally not ideal, because they are expensive and not as good for your rabbit’s health.

There are also definitely foods you should avoid feeding your rabbit. Oats, dried fruits, cereals, bread, cauliflower, and grains should not be in its diet. While many people feed their rabbits salad and cabbage, it is not the best food for them; their digestive systems are not meant to process these foods. Feeding rabbits pellets is OK on occasion, but they tend to be fatty, and sometimes full of seeds and other treats that are not necessary.