It’s that joyous time of the year again. The time when you REALLY get to humiliate your dog, cat, bird, ferret, fish or hamster (hey, humans are Equal Opportunity Embarrassers). Isn’t it enough that you dress your pet up like a sugarplum and take a picture and send it out as a holiday card to everyone you know in the world? No wonder he spends most of the time under the couch during the holidays. However, it’s not only the fear that you’ll dress him up like Councilor Drosselmeyer from The Nutcracker, or that Aunt Nadine will drunkenly force-feed him one of her half-eaten rum balls again, but it’s also the dreaded gifts our pets know are coming their way. Not common sense gifts like a good old-fashioned bone or chew toy or cat nip — but strange, frankly scary, objects that could only be dreamed up by the potpourri-addled mind of someone who spends 365 days a year in a Christmas Store. What follows is Petswelcome’s round-up of the Top 10 Stupidest Holiday Gifts for Pets. Just click on the gift name to order!:

1. Twinkling Christmas Tree Sweater: Not only will your pooch get snow kicked in his face by other dogs in the neighborhood for wearing this, there’s also the added bonus of possibly being electrocuted when the temperature hovers over 32 degrees–or by a tippy punch bowl. 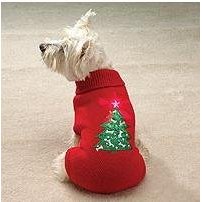 2. Yule Doo: Alright. You can’t give dogs stupid presents without some kind of excrement involved. It’s just common sense, right? So why not give him Yule Doo? In case you were wondering, it’s a tree ornament with glittering Doo hung on a satin ribbon. For what? you might ask. Why would I give my dog an ornament? For his tree, of course. Duh??!!??

3. Dog Stars – Astrology for Dog Lovers: This is the special time of year when we can joyfully take the half-baked pseudo-sciences and superstitions that don’t work for us and foist them off on man’s best friend. “Using time-tested astrology principles, this book will help dog owners better understand their pets. Readers will discover what star sign their dog embodies and what breeds are best for their astrological sign.” Uh-huh. Right. Look also for The Wiccan Guide to Dog Training and Your Dog’s Got Aura: A Canine Crystal Companion.

4. Santa’s Little Helper Fun Dog Toy: Now, it’s common knowledge that dogs love chew toys. But give them a rubber amputee chicken wearing a Santa hat, a red bra and army boots and, well, there just won’t be a couch big enough for them to hide under.

5. Vibrating Massage Mitt – Kitty Sajer: Cat’s just love being massaged by a faux representation of a dead, and very closely related, feline species. But what about Fido? Is it just coal in the stocking for him? No Sirree: Mitts are also available in Dachshund, Dandie Dinmont, and Cavalier King Charles Spaniel!

6. Chewgars Dog Rawhides: Holidays are the joyous time of year when vices are enjoyed and shared (and sometimes transmitted), not only between friends and family but also between species! There’s nothing like a big cigar after dinner to bring out that yuletide comradery with a close relative whose name you could never remember until you started Repressed Memory Therapy after the last holiday season. While dogs don’t necessarily join in with the socializing (they sensibly run into the next room with their treat), they’ll thoroughly appreciate you for the time you give them that they don’t have to spend with your family.

7. Johnny Barker Black Lab Canine Beverage: Speaking of vices, why should humans be the only ones allowed to projectile vomit into the Yorkshire Pudding? Dogs are family, too, you know. That’s where this gift comes in. Of course, there’s no alcohol in it (dogs really are smarter than us…). It contains only water, liver powder (donated by your various relatives) and lactic acid. Skoal!

8. Dog, Cat & Owner Christmas Gift Basket:   Nothing says, “I don’t understand you,” better than a gift basket. Hey, we give and receive them from people close to us, so why not to our Best Friend? It perfectly captures the puzzlement you feel when he shoulder rolls into that mysterious feces in the corner of the backyard. Similarly, for him, it captures his own helpless befuddlement when he sits at the bottom of the bed while you’re doing the Rin Tin Tin beneath the sheets. So may the species come together! Give the gift that says, “Huh?” to your pet this holiday season.

9. Doo Lites: Have we mentioned that doo-doo is hilarious.  You GOTTA get one of these.