Petswelcome.com / Articles / What is Catnip? 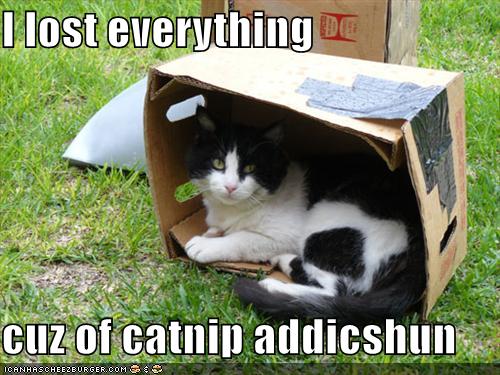 My cats love catnip and will eat it, roll around in a dried pile of it, and then lay on the floor in a daze afterwards. If there is a toy that has some in it, they will kick it and paw at it for a few minutes and then rest their head on it. Now and then my cats have also been known to smack each other while jazzed up from the effects of catnip. It made me wonder what is it about catnip that makes them perk up and act out of character. I found a few facts about catnip and a few facts about cats that I did not know.

What is in it that makes cats act differently?

Catnip is a plant that is from the mint family and contains nepetalactone. Nepetalactone is the oil in the plant that drives some cats nuts. No one knows exactly how it stimulates the brains of cats but it somehow triggers a response of euphoria. Your cat may begin rubbing his cheek against the item that has the catnip, biting, licking, drooling, or just roll around on the floor. Some cats will start to zoom around the house and leap about and purr louder than usual. The effects of catnip don’t last too long so there’s nothing to worry about and afterwards your cat may relax and fall asleep.

Do all cats love catnip?

The short answer is no. The reaction to catnip is inherited, so some cats do not respond at all to the oil. Young kittens and older cats tend to have little or no reaction to catnip. It doesn’t seem to stimulate their brain the same way. It is estimated about 30% of cats do not have any trigger response to the smell of the oil at all in the plant.

Catnip is not harmful but some believe that While focusing your cat’s attention can be helpful in getting your cat to bond with a new toy or a new spot—or, alternatively, calming him down—some owners still have questions about whether altering the mental state of their cats is always the best course of action. Catnip is not harmful to cats and they won’t overdose on it. It’s an herb and most cats will refuse to smell or eat it once they’ve felt they have had enough.

Cats sometimes need a little extra stimulus or something new and a catnip toy can definitely help perk up their day. If you give it to your cats don’t do it everyday as the effects of it will wear off once they are totally used to the smell of the oils. Most animal experts recommend every few days.