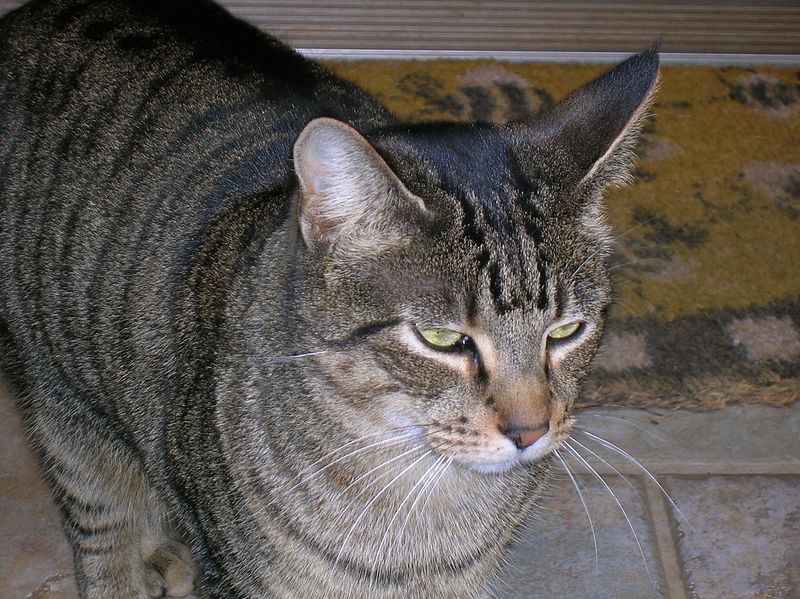 The tabby cat became the official cat of Massachusetts in 1988 in response to the wishes of the schoolchildren in the state. Tabby cats are not a specific breed, but rather a pattern of fur that some cats have. There are 4 tabby patterns in the world of cats:

The mackerel patter is vertical curving stripes on the side of the body. The stripes are narrow and may break into spots or smaller bars on the stomach and flanks. There is also often an “M” shape on the forehead of the cat. Mackerels sometimes have a peppered nose, black spots that appear along the pink tip of the nose. It is the most common pattern.

Classic tabbies also have a “M” forehead but the body markings are whirls and swirls with wide stripes that are sometimes described as a butterfly pattern. The legs and tails are often heavily barred and the pattern varies with the width of the bands.

The spotted pattern may not feel or look like a true pattern on a cat. It may be thought of a modification to the mackerel pattern so the stripes appear more as spots. There are large and small spots that you can see on certain breeds like the Egyptian Mau and Ocicat.

Ticked tabby pattern is a pattern where the hairs have distinct bands of color of them that break up the pattern into a salt and pepper appearance. There is a ghost-like strip or barring that is often seen on the lower legs, face, and belly. Each of the individual hairs will have a change in the color from the root to the tip. Abyssinian cats have the ticked pattern on their fur.

Tabby cats are usually domestic short-haired cats and can come in a variety of colors and sizes. Many people adore the M head and markings that tabby cats have and describe the tabby cats as an intelligent, cuddly, and friendly cat. They are sweet and gentle by nature but can become angry if they don’t get their way.

Tabby cats are the most common cats you may see walking around your neighborhood and some have white bellies or a white muzzle with their tabby coat primarily on their back and tail. Other tabby cats may be completely covered in their distinct pattern without an ounce of white. Because of the common mackerel tabby pattern, many tabby cats are often named Tiger.