A few years ago, I was visiting a friend in Santa Monica, CA, and, as we were walking down to the pier, I was amazed at the number of homeless people that had congregated there. The tents, pitched blankets, and other makeshift shelters offered a striking contrast to the upscale restaurants, high-priced condos and beautiful beaches they were nestled among. On top of that, I couldn’t help noticing how many homeless people there were with pets.

There is a sad, unacknowledged truth that someone walking by a homeless person rarely makes eye contact. Most likely it’s because we are scared, embarrassed, dumbfounded, clueless, and can’t—or do not want to—take the time to pay attention to their plight. But what I vividly remember about that day in Santa Monica was catching the eye of a German Shepherd who was sitting in the shade of a tree as his owner busily set up their camp for the night. And what I saw was not that different from my own dogs except that there was a tenacity to his gaze, as if a doubling-down on his dedication to his master. It was like the dog understood that he played a role in their well-being, which I’m sure he did. I could feel their bond. It was palpable.

All this came back to me the other day when Petswelcome got a phone call from a woman trying to find a place to stay. She had recently lost her job and house and was waiting for her tax refund check to get back on her feet. She was calling from the side of the road, sitting in her car with her three pets and no place to go. 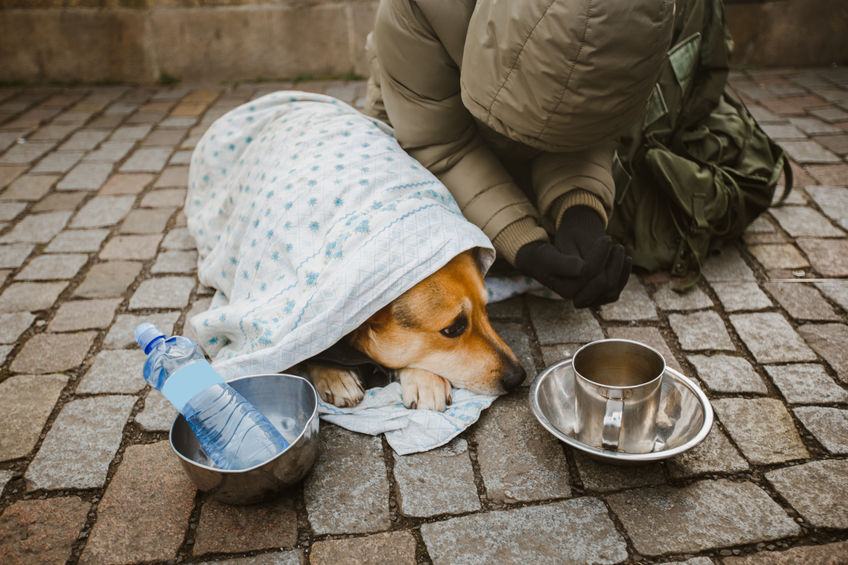 This type of call is not uncommon. As a matter of fact, we’ve been getting a lot more of them recently and it reveals the diversity of the homeless problem in our country today. It’s not always about an older person’s long, slow slide into poverty, eventually ending up in the streets.  That scenario, known as chronic homelessness, is just one type of homelessness.  Many times, it’s a sudden collision of events—the loss of a job, an accident, sudden sickness, or the death of a money-earning partner and no savings to hold them over. The woman who called Petswelcome was smart, well-spoken, had a car and a cellphone and isn’t the stereotypical “homeless person” most people might think of. Instead, she falls under the category of transitional homelessness, someone who needs shelter for one stay or a short time before transitioning back into more stable housing.

The causes of homelessness are numerous. The National Low Income Housing Coalition estimated that the average wage needed to be able to afford a house in 2017 was $21.21 an hour, which is far beyond most, if not all, states’ minimum wage. In addition, there has been a lack in available public assistance and affordable health care. Domestic violence, mental illness and the current opioid crisis are also large contributing factors.

It is estimated that over 550,000 Americans are homeless on a given night and that five to ten percent of them have dogs and/or cats. The percentage is as high as twenty-four percent in some places.  As I witnessed in my visit to California, the bond between the homeless and their pets is very strong. Many would give up their own food for their pets because they provide a huge amount of comfort as well as security and protection. Caring for and nurturing them also provides a sense of purpose, loyalty, love and meaning that is critical not only to homeless people with pets, but to all of us.

Since getting more of these calls, we’ve done some research to see what resources there are to help the homeless, especially those with pets who fall under the category of transitional homelessness.  We’ve also looked to see if there are any resources specifically for pets who live with the homeless and found a great one, Pets of the Homeless, that raises money to help feed them and provide veterinary care.

By helping the homeless feed their pets, or donating money for veterinary care, you are taking one burden off their shoulders and helping keep a critical relationship alive. We highly recommend that you visit and/or donate to Pets of the Homeless to help reduce this pernicious cycle of poverty by giving hope, aid and support to homeless people and their pets.