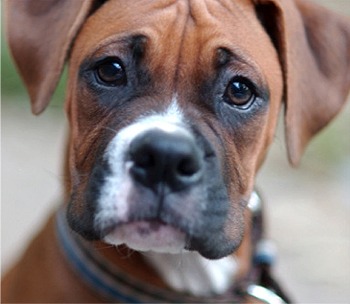 If you’ve spent any time with a boxer you’ve probably noticed two things, they are strong-bodied and like to play a lot and will get on their hindlegs to “box” their fellow canine. This breed can look tough and fierce but tell a boxer “no!” and you’ll get the sad puppy dog eyes and droopy muzzle that makes them look as if they are saying they are sorry and didn’t mean it. They are one of the top ten most popular breeds that are owned in the U.S. and are part of the working group of dogs.

The boxer traces its lineage to Germany. In the 19th century the dogs were developed and gained recognition after being in a dog show in 1895. The first boxer club was founded a year later. They were originally used to run down, wrestle, and hold down large game like bison and boars until their hunter/owner could arrive. The breed has split into three types, the English boxer, the American boxer, and the German boxer. The German boxer is the heaviest and strongest while the American is the lightest and smaller in size. The breed gained popularity in the U.S. after WW1 in the late 1930s.

Boxers are medium-sized, muscular, and have short fur that is easy to maintain. They have a chiseled head with a broad, blunt muzzle. They are proportionally built and have an athletic body that is balanced. Males tend to range from 22 to 25 inches and females range from 21 to 23 inches at the withers. Boxers are usually fawn with some white and black markings or brindle. There are also white boxers but they aren’t as common. White boxers are not part of the breed standard but they have proven to be great therapy dogs and service dogs. Some boxers may have sensitive skin and break out in rashes or have seasonal allergies. Overall, they are hearty and can live 9 to 11 years or longer with good nutrition and medical care.

Boxers are intelligent, bright, playful, and energetic. They can be great with children if properly trained to not play rough with them and are natural guard dogs. They need a lot of exercise and can become bored of the same repetitive routines so introducing new toys or new stimuli is important. Boxers love to play and when they meet another boxer the play can be rough and they may jump up during intervals of chasing each other around and box with their front paws.

They can learn commands and tricks quickly and respond very well to positive reinforcement. They can be stubborn but that can be related to improper training or sometimes trying to get a boxer to leave a dog park. Boxers also have mastered the art of making worrisome expressions which can make a person feel that the dog is really listening to them or understands their moods.

Always keep them busy! Boxers love to play and track, some play fetch while others loves to chase something like a laser pointer or frisbee. They need plenty of exercise or else they may become bored and frustrated which can mean your beloved couch might be torn up. The payback for being attentive, providing outlets for play, and good nutrition is lots of sobbery drooling kisses. Boxers are also problem solvers so make sure your house is puppy-proofed and they have something to do other than figuring out how to open the fridge.

Boxers are great dogs and comical with their expressive faces. They tilt their head when you talk to them, give you a sad look when they want whatever you are eating, and love attention.

2 thoughts on “Boxer: The Dog That Punches”