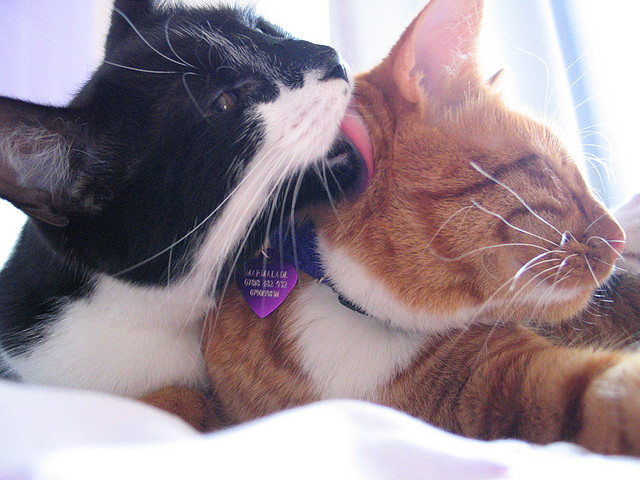 My cats have very clean ears. I can’t say that their grooming habits are perfect but they do have clean ears. Over the years I’ve watched them groom each other, snuggle, and argue. Cats will groom each other to spread a “community scent,” a common scent spread by saliva that indicates that they are part of the same pack. They will even lick me.

I already knew that cats groom each other for this purpose and also sometimes out of showing respect. Mother cats will groom their kittens to clean them, spread a community scent, and to promote healthy digestion. Kittens will lick their mother as a sign of respect, especially if they lick her muzzle and head.

My cats are almost 15 yrs old and have spent more time laying around grooming each other as the years have gone by. Sure, they will groom each other’s heads but they always focus on the ears to the point where I have two cats with very pink inner ears! I wondered if most cats (and it seems dogs) groom ears with this level of enthusiasm and did some homework. A simple search asking, “Why do cats like earwax?” resulted in over 10 pages of web results like this and this.

Turns out that cats are drawn to earwax.

Gross, right? But it’s not bad for them. Earwax contains dead skin cells, fatty acids, and small amounts of cholesterol. These are proteins and the scent of earwax draws cats and some dogs to want to eat. Cats, specifically, are attuned to the scent of animal proteins.

So, it seems that subconsciously cats are drawn to licking earwax in each other’s ears, and from a few posts, their owner’s dirty q-tips because the olfactory (scent) and brain receptors seek items of nutritional value. Cats have about 500 taste buds and to compensate for the lack of taste buds, their scent receptors far outweigh ours. The scent of earwax with its protein content draws them towards it and so they will lick another cat’s ears.

In the case of my cats, my male cat will lick his sister’s ears until she turns and hits him, walks away, and looks annoyed. A few days ago I heard her growl and looked up from reading to see her chasing her brother across the living room. Her ears were bright pink and the fur on her head was spiked up. It was pretty clear my male cat had become overzealous while licking her and made her angry. It was pretty funny and she looked a little crazy.

So while this can be bizarre or gross or just weird to us, scientifically looking at the reasons why puts it all in perspective.

Are your cats or dogs attracted to earwax?