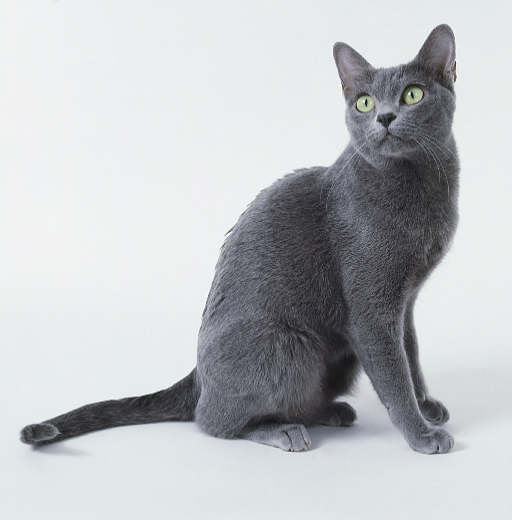 Korats are a breed of cat that first appeared in the U.S. in the 1950s and then in the U.K. in the 1970s. They are native to Thailand and are first mentioned in “The Cat-Book Poems” dating sometime between 1350 and 1767. They are very distinct looking although many of us may mistake other cats for this breed. Korats are short-haired gray cats and have heart-shaped heads and eyes that are usually green. Korats are only ever gray. This is rare as many breeds of cats tend to have multiple colors or markings that are acceptable for the breed standard.

Although there are many gray cats, Korats are different due to their body build which is naturally slim, and small compared to other breeds like Maine Coons. However, Korats are surprisingly heavy for their size and strong. They are one of the oldest breeds of cats and named after Korat, Thailand and considered to be a “good luck” cat. Korats were once given as gifts to newlyweds or people of high status and esteem.

The personality of a Korat is often described as being gentle and intelligent. They move softly and cautiously and do not like loud noises or lots of hustle and bustle. They prefer a calm house and will bond very strongly with their owners. If your are owned by a Korat, expect lots of cuddling, lap sitting, and waking up to having a cat sleeping on your chest. They get along with other cats in a house but may often be the “leader” or “dominant” cat. They are active and playful and often can be good with children as along as the children know how to properly interact with a cat.

Because their fur is short and does not have much of an undercoat, they are often good for households where someone may have mild allergies to cats. Their fur tends to not fall off when being stroked or petted and their dander and oil isn’t very high compared to other breeds. They often look like they have a halo around them because of their fur changes from blue-ish to silver from root to tip. The silvering at the tip creates this halo effect when hit with the right light.

Korats are beautiful cats but not often found in many homes as they are not very well known compared to siamese cats, persians, and the extremely common american short-hair. However, if you ever see a Korat, you’ll know and be amazed by its build and its personality.

2 thoughts on “Korats: The Heart-Shaped Cat”