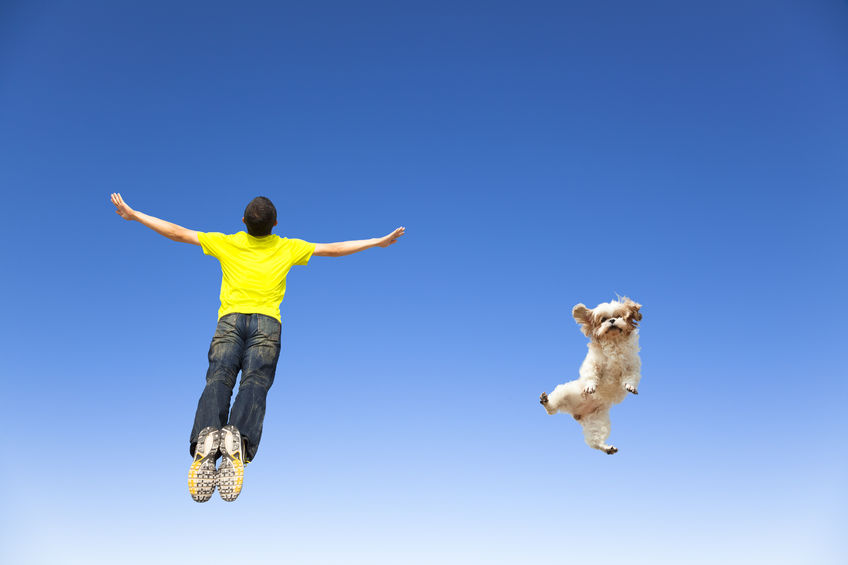 I know there are a lot of weird and wacky things people do with dogs. But I keep it on the straight and narrow with mine and, in general, do normal things: go for walks, do road trips, play fetch, roll around on the grass and howl, try to catch birds in our mouths, urinate on my neighbors’ flower gardens, dry hump the living room furniture, etc.  Actually, now that I’m writing this, it doesn’t sound all that normal (and I really apologize to my neighbors…), but that’s my point. The great thing about dogs is that they take you places you wouldn’t normally go, make you do things you wouldn’t normally do without even realizing that it’s very weird behavior. These things include not only organized activities but also daily interactions, things that, while you’re doing them, feel normal but, seen from the outside, look like you’ve been sucking on the insane root. Of course, it’s a two-way street. More often than not, we’re making dogs do things that we like to do—or not do—ourselves and they put up with it because, well, we feed them.

So here, in no particular order, is Petswelcome’s top 12 weird and wacky things people do with dogs.

If you’ve ever watched the Olympics, you’re probably familiar with Dressage, which is a French word that means “two otherwise intelligent and dignified mammals going out of their way to look silly.” Usually it’s done with horses, getting them to do very fancy unnatural steps, prancing as if on tiptoes, going sideward and backwards, or basically making them move like my Uncle Frank trying to find his car in the parking lot after a long night at the Alibi Bar & Grill. But some people do it with their dogs, too. And, as seen in this video it’s positively riveting. Or not.

Okay, now that you’ve gotten your breath back, let’s take it one step further and look at Freestyle Dancing.  I don’t know about you, but whenever I judge good dancing, it always comes down to one question: is the dog as good as John Travolta?

Turns out dogs are good on boards of all kinds: skateboards, surfboards, and snowboards are three that they seem to have a natural feel for. But I like a dog that takes it a step further and manages the impossible: hopping on a hoverboard without immediately looking like a dorky nerd.

There are some activities that are really not enhanced when you do them with your dog. Synchronized swimming and Jenga are two that come to mind. And I thought skiing was another. But this dog seems like he’s really enjoying it and has the serene look of an animal that just got to spend a day on the slopes while using his owner as a sofa and making him spring for an absurdly expensive lift ticket. Turns out humans are really gullible. Hot toddies for everyone back at the lodge!

There are some things dogs are better at than humans. That’s because they’re smarter. Beyond getting your owner to pay for everything, it also includes pretending you’re into working out with him while you’re actually leaning against the wall and getting a good back scratch.

Talking dogs scare me almost as much as drunk clowns so when I see one at a talent show, I get the creeps. Maybe it’s because we’re putting words in their mouth which, well, is just wrong. What I want to see is a dog that really talks and speaks her own mind. In this case, I get the feeling Miss Wendy would tell Simon Cowell to cut with the fawning, gee-whiz-ain’t-I-cute looks and stick his mic where the sun don’t shine. 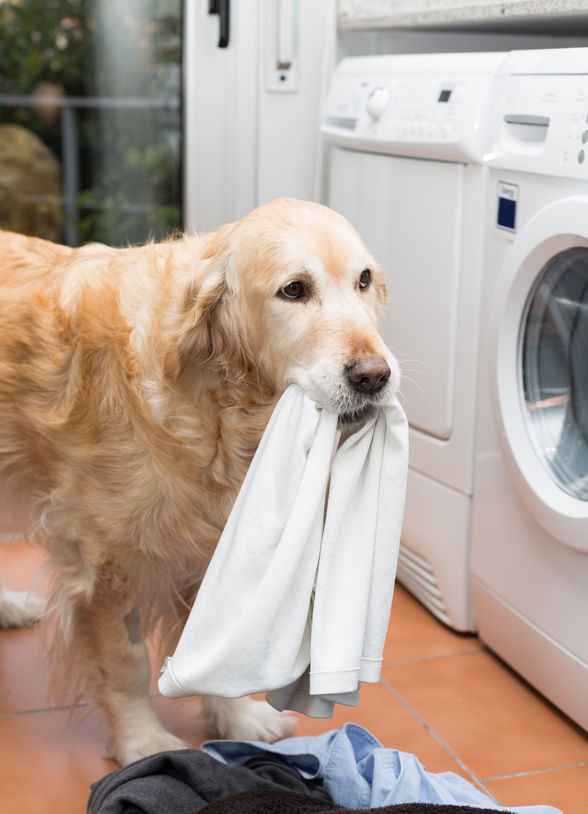 10. Helping Out Around the House

I’ve taught my dogs to sit, lie down, shake hands, rollover and not to jump on people. Of course, they don’t do any of those things and, on top of that,  I was wasting my time. I could have had them doing the laundry and generally cleaning the house  while I was out on the slopes skiing without them.

11. Feeling Guilty
Feeling Guilty is less an activity than a way of life. An art form. But we’ve included it on this list because people and dogs spend a lot of time engaged in it. In many ways, it’s the glue that binds us. For example, I feel guilty when I have to go out for the day leaving my dogs alone for many hours. They feel guilty when they snarf the Oreos I left on the counter and then regurgitate them on my bedroom pillow. The only difference between human and canine guilt is, since dogs are much more honest and upstanding than people are, they feel more guilty.

12. Reuniting
Next to feeling guilty, one of most common things humans and dogs do together is jump up and down, fall on the floor, howl and drool on each other when, after a long time away, they finally get back together. In my case, because my dogs seem to have no sense of time, it could just be a 30-second absence: walking out the door to my car, realizing I’ve forgotten the keys, and then walking back into the house and being greeted again in a 30-minute love frenzy as though I’ve just returned from a tour in Afghanistan.

We really hope and encourage that you do totally ridiculous things with your dog(s) and would love to hear about them for our next Top 12 list.