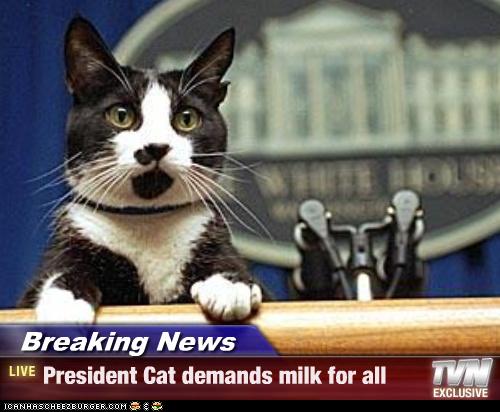 Many U.S. presidents have had pets during their time in the White House and some were exotic and even dangerous to own. While many had dogs, cats, horses, and small animals some presidents went to the realm of exotic and dangerous pets and had bears, tigers, and alligators!

Here’s a few of the many pets that have lived at the White House:

Thomas Jefferson had two bear cubs that were a gift from Lewis and Clark.

John Quincy Adams had silkworms but also had a pet alligator!

James Buchanan had a dog named Lara and an eagle and elephant to keep him company.

Tabby was the first White House cat belonging to President Abraham Lincoln. Jack was Lincoln’s turkey and he also had two goats named Nanny and Nanko.

Theodore Roosevelt had several dogs including a bull terrier named Pete who is famous for chasing the French ambassador through the White House and tore a hole in the pants. He also had a dog named Skip who would ride horses with the family. Slippers and Tom Quartz were President Roosevelt’s cats and Algonquin was his pony.

Dwight Eisenhower’s Weinmaraner, Heidi, is infamous for jumping up on Mamie Eisenhower and for ruining a carpet that ended up having to be replaced when the stain did not come out after a night of scrubbing it.

John Kennedy had requested to be greeted by his dogs whenever he came back home. Tom, his cat, had a formal obituary written up when he died in 1962. Kennedy also had a canary named Robin, Zsa Zsa the rabbit, Debbie and Billie and hamsters, and three ponies named Macaroni, Tex, and Leprechaun.

Freckles, Blanco, and Edgar the dogs were owned by Lyndon Johson. They shared the White House with a few hamsters and some lovebirds.

Liberty was Gerald Ford’s Golden Retriever and they were both once locked out of the White House during a late night “potty break.” Chan, a siamese cat, is thought to be the one who locked the doors.

George W. Bush had a feisty scottish terrier named Barney who gained a reputation for nipping those who visited. Barney had such an attitude about strangers walking around the White House, that tours to the Rose Garden were off-limits if Barney was sunning himself or enjoying a romp around the garden. Barney shared his White House digs with two cats, Ernie and India.

Barack Obama shares the White House with Bo, their Portuguese Water dog, who has his own baseball card with stats and lists his favorite food. Bo is always in his tuxedo and ready for any formal parties and pictures. He’s been featured on “Dogs 101” on Animal Planet and has been running around the halls of the White House since April 2009.

One thought on “U.S. Presidents and Their Pets”

At Petswelcome, we get many calls about taking pets on a plane. That’s... More